My cooking skills were born of necessity.  Being the only girl-child in a family with two working parents,  the culinary responsibilities were mine.  We were down-and-out in those days and my cooking was appropriately white-trash.  Wish the concoctions could be called something cool like ‘soul food’ or ‘low country cooking’, but it was really poor-white-folks cookin’.  Beans with ham hock, sauerkraut with pork ribs, shit on a shingle corned beef hash on toast and (admitting…is…so………..HARD) beanee wienees.  There, I said it.  Happy?

When the only girl-child married several years ago, I was convinced she would love to have a cookbook filled with these family classics.  Since I am an obsessive maniac over-achiever, this became a monster project. Like a Dan Brown novel, the seed of my blog’s name lies secretly coded within the pages of this book, Cafe Diem.  I dug it out from under the Vatican archives to share with you. 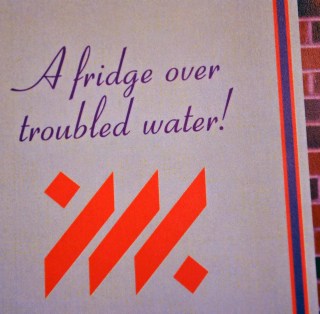 Can you decipher my blog’s name in the code below? OK, I lied….it’s not in code. I just said that to keep you interested. But, there it is! Done years ago in this cookbook.

Well that’s it, my fellow Robert Langdons. The Holy Grail. Thanks for playing along with me. One never knows when a bad food pun will come in handy.  Mystery, solved. Question, answered.