The Tuesday morning note from the universe:

A graceful hawk swooped from the morning crystalline sky and perched upon a naked branch. That was my view this morning as I sat in the hot tub. My inner voice harshly harangued me about being a lazy slug and starting my morning chores late. (stick it where the sun never shines, inner voice!)

The proud hawk buoyed my heart to new heights. Made me want to share with you where I’m finding inspiration these days.

I’ve been involved in rehearsals for Amarillo Opera’s upcoming production of Les Misera….bluh. Don’t think I’m going to be able to continue with the grueling schedule, but allow me to describe my uber-talented cast mates. Like the regal hawk, they provide plenty of reasons to look up in wonderment. 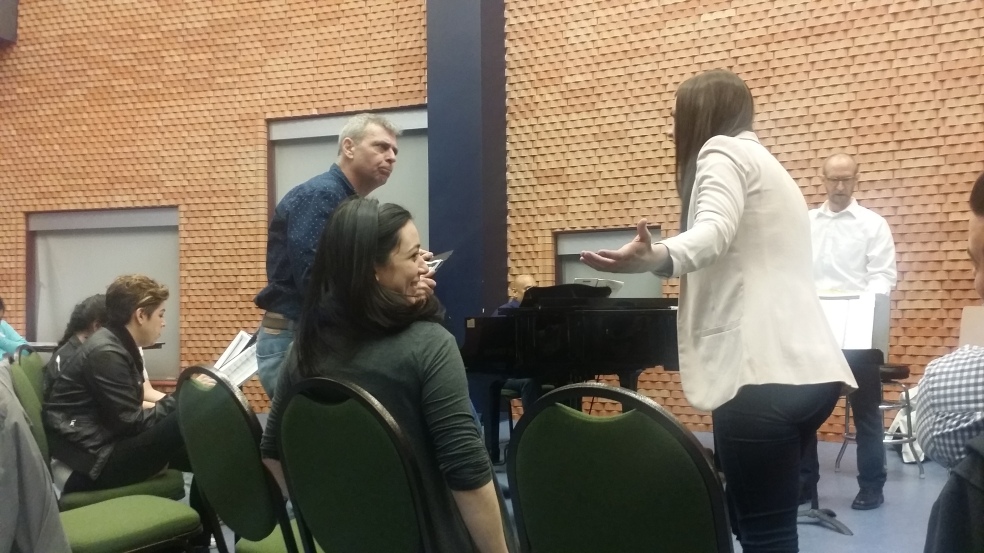 You may describe them as our stars. These are the dedicated professionals who have spent their lives honing their craft. They are exactly as you would expect….off-the-charts-talented. They can blow the roof off a building with the air rushing through their vocal cords. Their acting ability can spike the stock price of Kleenex on the Dow. They are wonderful to behold. The path they travel is never easy and it’s brimming with rejection. I would enthusiastically storm the Bastille with them.

The ensemble. The community members. The rest of us. This is the group I’m treasuring today.  Let’s consider:

The community children/youth. They could be home in front of their computer screens, they could be texting, they could be involved in any number of things. Instead, they schlep to long rehearsals with school books in hand. They study between scenes and their parents run a continual carpool rivaling the busiest taxi service. They want to be involved in something bigger than themselves. I glimpse the future in their eyes. Let’s blast a rousing strain of Do you Hear the People Sing? in their honor!

The college students/young adults. This group packs tons of talent. Many of them are vocal/music students trying to learn about life in the business. They could be studying, dating, dragging the bars….but they bless us by being enthusiastically present. One of my favorite students is a young man who is working toward his master’s degree in choral conducting. He’s the age of one of my kids. I notice him not only because of his heavenly voice, but because he comes to every scene, every note, with 100% dedication and passion. I believe every measure he sings. I swear, if I touched him while he was acting I would scald my hand. He’s that red-hot! Let’s toss our berets in the air in celebration of this hard-working group! 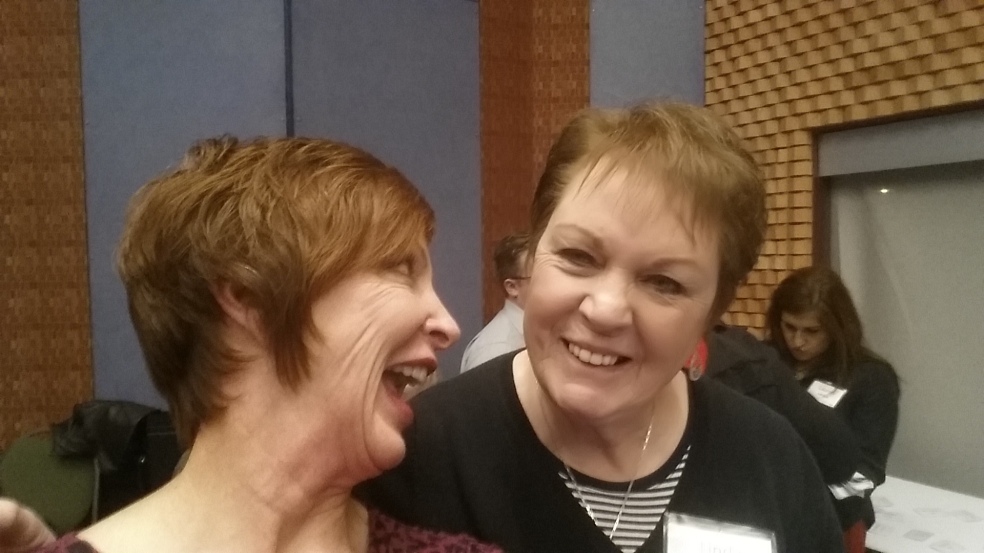 This group includes those who sport graying hair, slipped discs, sore feet and hemorrhoids. They stubbornly refuse to believe the best days are in the past. The olders juggle grandkids, aging parents, day jobs and diminishing stamina. Consider one of our treasured olders; a lovely lady who lives in an outlying community. She makes the almost-hour commute every day. I worry about her lonely late-night drives home. During a break in last Sunday’s long rehearsal schedule, she took a nap in her car. Consider the construction worker who makes 300 mile+ work trips during the day. He attends rehearsal like he just woke up from a refreshing nap. I’m awestuck in the presence of these castmates. Let’s hoist the banner high for them!! 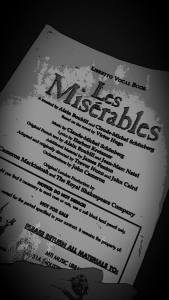 You’re sure of my bias now, aren’t you? I admire-the-hell out of those who make their living in the humdrum and sometimes grayscale real-world, yet contribute colorful and uniquely textured yarn to our community tapestry. This is the cumulative art we call Les Misera-bluh.

Your efforts enrich my One Day More immeasurably. Don’t ever give up on your art.

Amarillo Opera is proud to provide a mechanism and framework in which these noble artistic efforts can occur. Bravo!

Did you have me pegged as a Matt McAndrew fan?

I know, I know….I’m way outside the expected demographic of this show

Or are you a fan of the 3-namers: Craig Wayne Boyd and Taylor John Williams?

Ever notice the person with the best voice (technically) never wins these competitions?

As an audience member or a potential itune downloader, with what are we connecting?

Here’s my theory. I think we like and appreciate singers who aren’t technically perfect. We connect with the person comfortable in his own skin. A person who embraces his own imperfections/quirks and bravely bares them for the world to see.

A few seasons ago, I adored the quirky Nicholas David.

A bearded white guy singing soul music? Nicholas has a nice voice, but it was his interesting interpretation and 100% commitment to his singing that I admired. I’d buy a ticket to his concert. Any chance he’ll come from Minnesota to West Texas??

I’ve mentioned before that I sing on Monday mornings with a group of retired singers who visit retirement/nursing homes. Last Monday, several of our group sang Christmas solos for residents at the local veteran’s nursing home. If you’re not an aging vocalist, you might not fully appreciate how difficult it is to get the rusty pipes warmed up and ready to sing at 9 am. 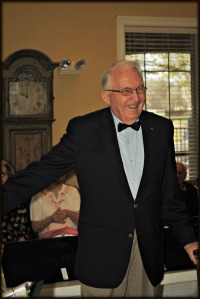 As the holiday serenades washed over me, I was struck by the interestingly rich quality and warmth of the voices. These were tones of character-voices bespeaking a history. I imagined the laryngeal tapestry required to produce such sounds:  a bride resolutely saying ‘I do’ at the alter, a mom gently singing lullabies to her baby or perhaps vocalizing (loudly!) for her toddler to avoid an unsafe street, a young man calling signals for his team mates in a football game, an officer barking orders at soldiers in his charge, the cries and prayers uttered at the graveside of loved ones. These disparate elements are woven together producing a distinctly unique, imperfectly-golden sound. Perhaps these voices aren’t as nimble flitting up and down a scale as they once were, but they are the grace notes of a full life.

I guess we’ll keep squawking as long as a chair turns.

Imperfections? I’ve got ’em. Funny….they might just be my biggest strength. I’m unfurling the freak flag and running it up the pole. There’s room for your flag, too!

Hope you have a chance to add your voice to the wonder of the unfolding Christmas story.

I STILL don’t understand why cast and crew were excitedly whispering ‘toy, toy, toy’ and patting me on the back before the opening curtain. The mysteries of the Opera, I guess.

The remnants of Candide on my dressing table Monday morning.

Thought you guys would get a giggle from seeing the crinkled list I carried in my bra during the show.

I had another equally descriptive list for Act II. Thought I was Mrs. Alzheimers for needing these reminders UNTIL I bumped into the experienced and talented Robert Orth (our Voltaire/Pangloss) backstage doing the exact same thing. He told me I was smart. Thanks, Bob!

The shows were wonderfully received and every person involved deserves the highest commendation. Bravi tutti or thanks all y’all. Each of the performances had its own small share of glitches. It’s LIVE theater for goodness’ sake. Hopefully, the soaring music and fun heart of the show will be what patrons remember.

My cheeks hurt from smiling so much. I will forever remember my talented cast mates and the majestic closing strains of Make Our Garden Grow. Pure bliss.

Monday morning finds me tripping the footlights in a local retirement home.

The joys of music are universal and ageless, aren’t they?

I’m grateful for this transition from Candide back to normal life.

If Candide taught me anything, it’s that we gain joy and happiness from our work. Happiness comes from tilling our own soil; from laboring in the garden of our own backyard.

The vantage point from my garden looks mighty heavenly this morning.

Verdant love to all.